Just when you think you’re out…

Nearly five years ago, RvB took on the duty of offering the people of New Eden a regular NPSI roam. You may have heard of it, it was known as RvB Ganked. Somehow, “Ganked” very much became my baby, something I managed for years until the time I stepped away from EVE, following which the Ganked mantle was taken on by the good people at Spectre Fleet. Even when I came back, I was (and still am) happy to see Ganked continue with Spectre and show my face from time to time to fly with friends new and old. I was happy doing that, I thought I was out of the limelight.

They pull you back in!

Recently, Vision Thing Achasse got in touch with me to say RvB was starting up a new NPSI roam as part of their efforts to rebuild the RvB brand following some drastic changes late last year, and offered me the chance to FC the first roam/event.

I checked my schedule, gave it some thought, and agreed. I put 5 years of my EVE life into RvB, its a time I’ll never forget and to be offered this opportunity to help them just made so much sense.

So on Saturday 19th March, come join me, Mangala Solaris, and a host of other pilots for a roam in search of DEATH & GLORY, in the inaugural RvB Memento Mori roam. 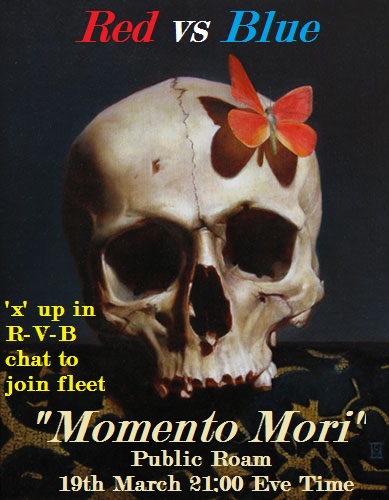 As FC I got to choose the ships and what not for the night, and following a long look at all the options available (NAUGS, Eagles, AHACS to name a few), I decided to rock it old school. To bring back that insanity that signified the early days of RvB Ganked, when my RvB experience still influenced how I ran those roams. Namely, FRIGATE HULLS.

Yes, you read that right. Its a kitcken sink frigate fleet. Break out the frigate hull(s) you love the most and lets have a great night in support of RvB and it’s future within the EVE community.

You will all die eventually, you’ll lose your ships, get shouted at by me, and you’ll enjoy it. Meet me in Oisio/Hysera from 20.00 on 19th March. Comms will be an RvB Mumble server:
server: public.rvbeve.com
port: 43224
pass: RvBLives