This past weekend, Ganked 73 was Guest FC’d by our dear friend and ender of evenings, Alphastarpilot, formerly of Thorn Syndicate, currently flying for Test Alliance.

Yes you read that right, logistics.

And boy did we ever get some logistics. We had over 35 logistics in fleet with us for this roam, together with some 20 damp boats and assorted other ewar platforms, and around 100 guys flying T1 ARMOUR HACS (this video never gets old).

Following form up we bounced into low and started heading towards Alpha’s chosen destination, B-DBYQ. On our journey there we discussed the new jump animation, how it affects traffic control and how it can cause neutral’s jumping in with us to die when they exit the animation, like this Curse & this Proteus. I wonder if they even expected it…

We soon reached B-D however CFC where slowly returning to the system after trying to kill a titan elsewhere, and so we moved into J5A-IX and waited.

Just as we were getting ready to warp to a pos to bump a carrier out, LOCAL SPIKE!

And it was on. DPS & Ewar had anchored on the FC, our logis were anchored on an anchor of their own and the CFC had brought tacklers, HAM caracals & scythes. Their tackle started melting, bubblers exploded – in one case he came right back and exploded again – T3 snipers jumped in and died, however our logi anchor got caught by lag and fought hard to recover just as the CFC fleet started heading their way…  That didn’t stop our logi though, no sir! They kept the reps coming as long as they could until they were overwhelmed, then the rest of us started to really feel the pain of fighting the numbers of the CFC next door to their staging system! And through it all fleet was damn well behaved! 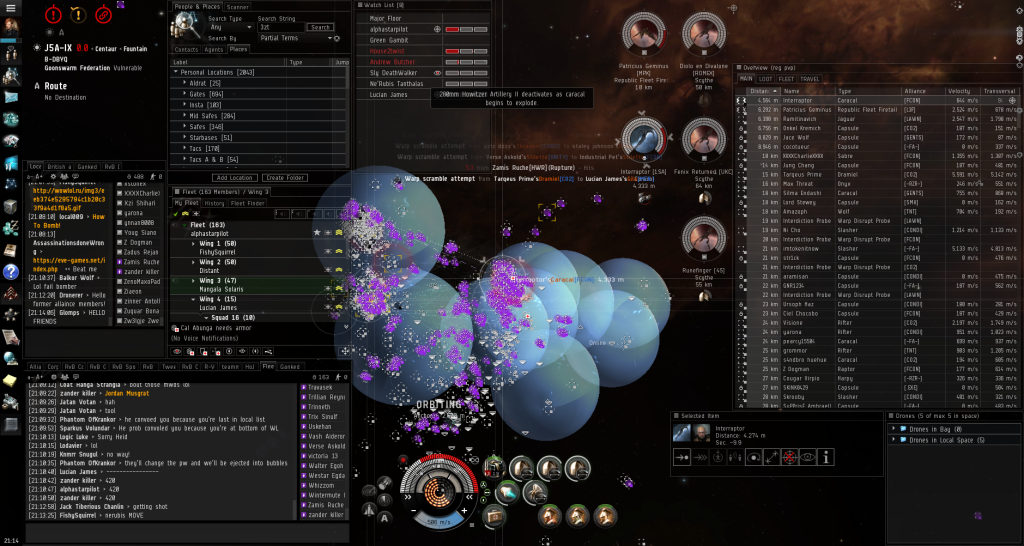 By the end of it a couple of hundred ships had been destroyed between both sides. Our view & EVE-kills view – I tried to BRDoc it, but it breaks the site while I still have a third of the corps left to assign.

Following a short break we reshipped into talwars, and headed back to the area, running over this stupid tengu as we did so. The next hour and a half was some of the most fun I have had for a while, Alpha really showed off how well talwars can work to the fleet, and I picked up a few tricks for use with them too.  The “doctrine” itself punches massively above its weight, especially on this proteus! During our time in B-D with these ships we got some 90 kills or so and had a riot doing it.  Here is EVE-kill for that time as the Ganked killboard splits the battle into too little a timeframe for me to link properly.

All in all a really fun night was had, over 200 kills done, nearly 11 Billion isk exploded and a new guest FC inducted into our ranks!  Personally, I and many others had some misgivings about Alpha FCing the roam, as we assumed that it was all a cunning plan to tarp us and ruin our fun, however this was not the case and I for one am happy to put my hands up and admit I was very much surprised!

As usual this RvB Ganked roam was sponsored by Somer Blink – who are also sponsoring the RvB AT XI team this year – and several people won sponsored prizes during the roam.  These will be contracted to you by a representative of Somer Blink within the week.  Congratulations to you all!