Of all the reasons to go to war, would you have ever guessed that the word “Mate” was one of them?

Neither would we in RvB.

However, as it turns out, this is a perfectly acceptable reason for certain parties within NCDOT to go to war. The background to why exactly they think this way is as follows:

NCDOT alt by the name of Jimmy 4chan (inspired huh?!), joins RvB.  Along comes one of our theme weekends, and Jimmy breaks the theme, kills a few guys while in something he should not have been, and as a result gets convo’d by the one and only Nyu Trustan. Now Nyu, in his chat, uses the word “mate” quite a lot and Jimmy, being a very special snowflake, takes some offence at it, threatening to get Nyu banned…

So, Jimmy leaves/gets kicked for being an illiterate baby who cannot comprehend something as basic as our weekend theme’s – then again having read some of the smack NCDOT spam in local when my RvB Ganked roams run across them, I am beginning to think they are all exactly like Jimmy – and very soon after, NCDOT declare war on the glorious forces of Red vs Blue. This is swiftly followed up by Jimmy’s main/another alt, convoing an RvB director type about the joint war declarations (I have trimmed this a little):

Following this, the RvB spam crew (me amongst them) starts posting about this on Reddit, Twitter, EVEO (Login to the EVE forums before opening this link), Failheap Challenge & of course the RvB Forums, the next 24 hours become some of the most fun I have had in EVE without un-docking.  During the time before the war itself goes live, we get some allies, the most notable of which being Goonswarm Federation, We Form Voltron & The Devil’s Tattoo.

And then it was time for us to fight,  with first blood in The Mate War going to the pilots of the Blue Republic for this kill. Shortly after this kill occurred, we received word that a “large”, BS & BC heavy group of NCDOT pilots was rolling out from Jita:

A couple of hastily set-up RvB reaction fleets were formed and very very loosely coordinated, and then it was time for some action. One of the in gates for Otela became the site of the first major battle of this war.  And well, excluding some purple on purple mishaps – overviews really are not that difficult to set-up mates – it totally went RvB’s way. Yes, it can be said this is down to our number’s but also our rank & file members seem much more willing to prosecute this war than those of the NCDOT (those who can get into High Sec space anyway!) For a sample of what they were thinking after this action, see this pastebin, the highlight of which is this line:

One of the member’s of the smaller RvB “veteran” fleet recorded this fraps of that fight: 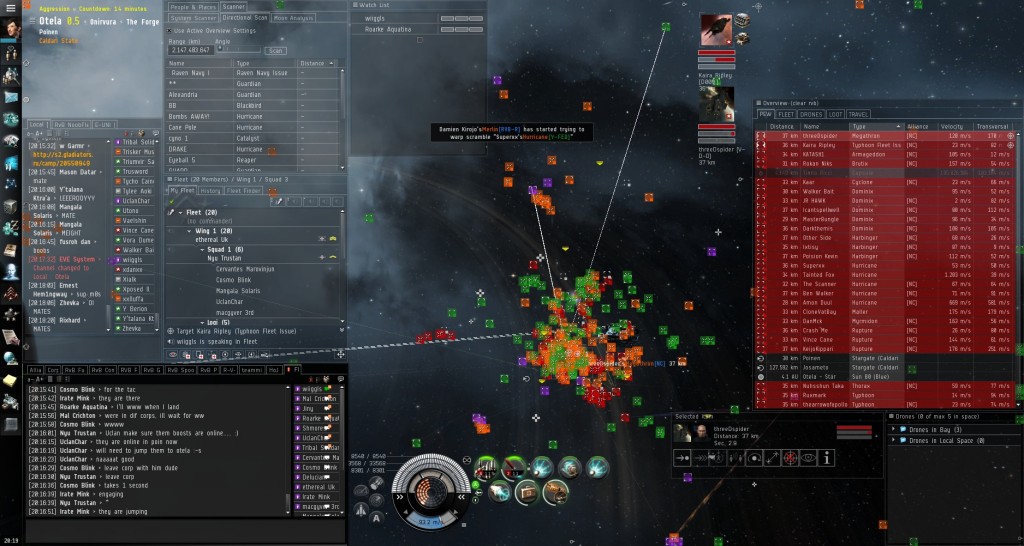 After a short lull, NCDOT once again left Jita, however this time they had a much larger gang with a very very solid (on paper anyway) core of 30 battleships, and after some neutral scanning of those ships, it turned out NCDOT were fighting like it was 2010 again. Lots of RRBS… Once again, RvB coordinated between it’s fleets and following some back and forth between gates, the larger of our groups jumped in and started spreading tackles, catching pretty much everything the NCDOT had before they could even think of bailing. Once aggro was established, the smaller veteran fleet jumped in, and while our mates dealt with the 12 – yes 12! remote repair Dominix’s, we focused fire on their Megathrons, Armageddons and Typhoons. With your’s truly doing the calling.  Within 10 minutes it was all over. Some of the enemy had escaped but not too many. The field was our’s once again! 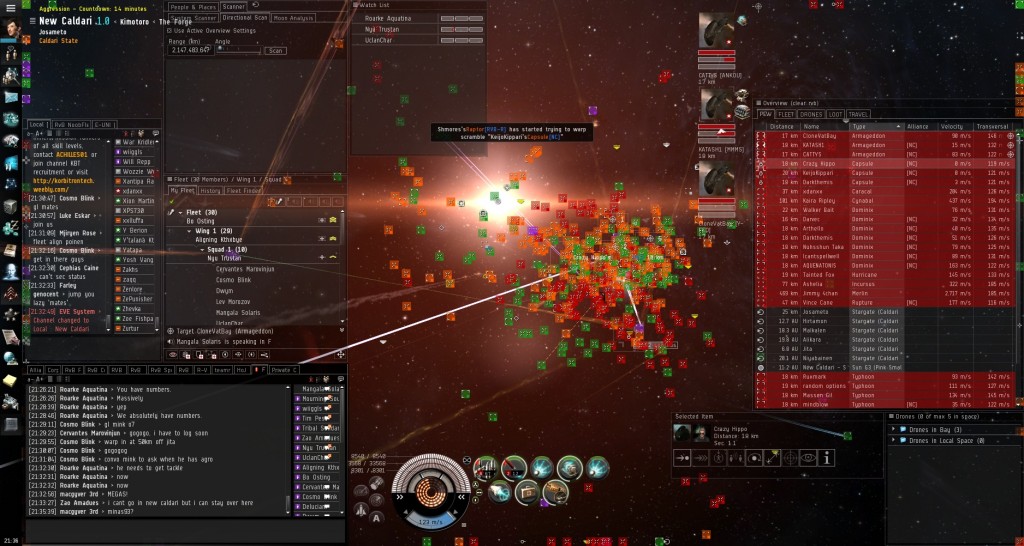 More Pastebin logs of the enemy chatter following this engagement can be found here, here & here. The final one is the most amusing as Poision Kevin accuses us of not fighting, obviously he does not understand that herding 180 mostly drunk, certainly bloodthirsty cats around is damn difficult, as after all he is a member of such a “pro” pvp alliance. And when we did fight, things just fell apart for his little group. Amusing is such an understatement, but that’s my view and I shall stick to it.

The rest of the night following this was pretty uneventful. Small skirmishes around the way, Yellow Federation pulled off a smart-bomb BS trick in Jita – hey it happens, its not like an RvB Ganked veteran can be in EVERY RvB fleet warning them about how obvious a smart-bomb BS is to spot….

To follow the action, watch the campaigns on the 3 RvB killboards:

While I have linked other vidya’s above from the view of the smaller veteran RvB fleet, the following are taken from the view point of members of the larger spai infilitrated RvB fleet (Courtesy of Karim alRashid & Shadowgirl9), however just allow me to say to the members of that fleet, BLOODY GOOD JOB GUYS! You did a bang up job taking down the targets as your FC’ and callers targeted them, without you guys willingness to fight, the first day could have been a wash out for us.  So thanks again!

To our enemies in NCDOT & Yellow Federation all I have to say is keep trying eventually you’ll soundly thrash us, and regardless of how long it takes, keep bringing the good fights and we’ll keep calling you mates in local.