Way back in the dawn of time on an internet spaceships forum that is now lost to us, a few pilots had the idea to set up 2 groups that would be at permanent war and would have no rules on who could or could not join, as long as they wanted to explode/be exploded by someone.  They named the corps Blue. & Red. and for a while all was right with the world.  Explosions happened and good fights were had.  Then after a few months, much drama and eventual leadership inactivity caused the experiment to come to an end.

Around a year later, on that very same forum a few of the original protagonists of the Red v Blue experiment decided to try it again, and this time it would be harder, better, faster, stronger than the last time.  And so on 25th September 2009, a new war began between the forces of the Blue Republic & the Red Federation.

After a week, 2800 explosions had been made, and the rest as they say is history.

Despite several changes in rules, leadership and even location the war is still going strong, with hundreds of explosions daily. From the ubiquitous T1 fit rifters to multi-billion isk fit vargurs and everything in between, no hull is sacred in the eternal war that is Red v Blue. During these 1127 days, each side has passed 100,000 kills solely of the other, with Blue reaching it first, soon followed by Red in a flurry of activity – that happens when you offer 1 billion isk to each of the pilots who get the final blow – and much more recently this explosion became the 300,000th RvB explosion.  For those interested, we have exploded the general eve populace over 20,000 times, several thousand of these being in third party wars, the most memorable for me being those against the good people at Ivy League. 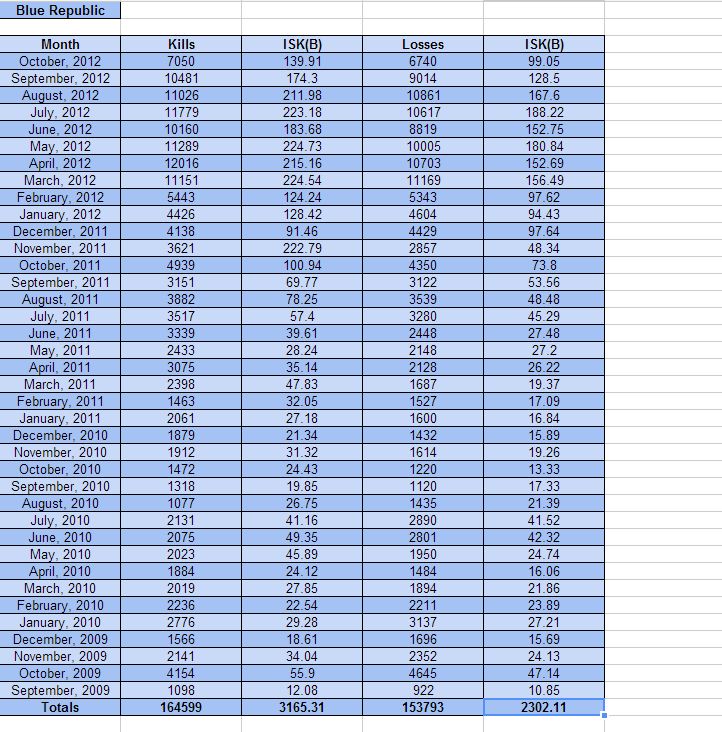 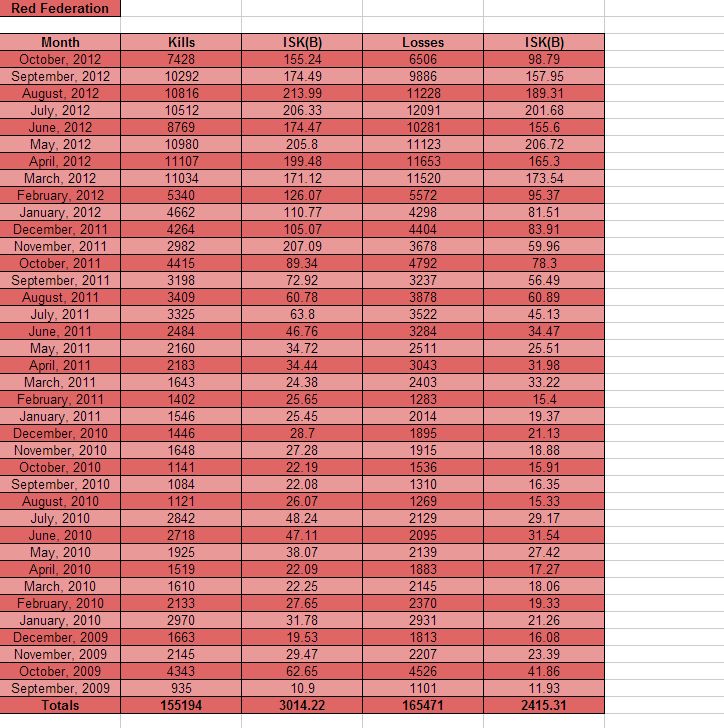 As you can see from the tables above the action never ends.  Yes, we have had our quiet months, but that has not stopped the war machine rolling on, keeping both corporations in the Top 20 on Evekill for several years, as well as several of our pilots up there too month in and month out. As we continue on this destructive course, our member numbers also keep increasing – helped along by our very own recruitment thread, live streams, hundreds of related videos & publicity courtesy of CCP:

So much so that Red Federation just inducted its 3,000th member.  Say hello to Eanok: 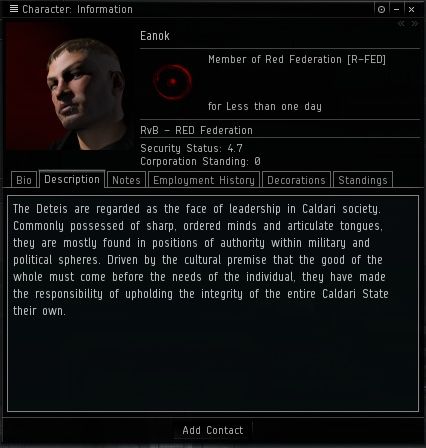 However RvB is already – when combined – the single largest entity in high sec space, and we are the 9th & 10th largest alliances in EVE as a whole. And all that without holding space or making our members any money.  Who knew a very explodey isk sink would be so popular, I certainly don’t think the original protagonists of Plave, Tron, Chakarai, Joe Appleby to name a few could have envisioned this 3 years ago when we first went “live”.

Wait, we haven’t always lived in The Forge?

Yes, RvB has not always lived in The Forge. We started off down in Verge Vendor, why I cannot tell you as even my memory gets hazy after three years, what I do remember is that it is a remote part of Empire space in todays terms and that logistics was an absolute pain when supplying yourself with toys.  Since I seem to be turning into the “RvB Stats guy”, a few weeks ago I sat down & looked into our various homes, the explosions we made while living in each & how long we spent in a given region, unsurprisingly the closer we moved towards the economic heart of Empire, the more we exploded, the larger we got…

As I said above, three years ago we started off in Verge Vendor which was the scene of over 49,000 kills – valued at 740 BILLION ISK. We lived here until August 2010 when we made the jump to Everyshore, which if you can believe it, proved even more out of the way (despite being close to 2 market hubs!), but we still reached around 39,000 kills valued at 560 BILLION ISK in our time there.  It was in July 2011 that we decided to leave Gallente space and so we moved to the much more populated Caldari region of Lonetrek, achieving 75,000 kills valued at 1.3 TRILLION ISK while living mere jumps from some of the busiest Empire & nullsec regions, however the part of the region we lived in was not well loved of the membership and so in March 2012 we relocated one region over to The Forge and we have been here since then. To date we have over 145,000 kills valued at 2.1 TRILLION ISK.  Yes, in 6 or so months, we have killed nearly double what we did in the 9 months we lived in Lonetrek.

You’re obsessed with the number 3.

Keen eyed observers will have noticed that I keep mentioning that RvB is three years old, or has done x or y in 3 years,  I do so because – & this should be obvious – the Red v Blue war reached its third year of explosive goodness on 25th September 2012. As with previous years – see the celebrations I organised for the 2nd birthday back in 2011 (Anywhere But, Sink the Bismarck & RvB Ganked 3: Time on Target) – I made a conscious decision to step up to the plate once more and put together various events to help the thousands of pilots who fly along side me, celebrate this past year and look forward to the next.  Luckily, this year I was not alone in organising our birthday events, as over the summer I became one of the founder members of the RvB events committee – not really a surprise considering my events pedigree over the past few years of my time in RvB.

I personally organised a series of RvB Ganked roams: Ganked 40, Ganked 41 & Ganked 42. All of which were really good nights with very high numbers of RvBers attending and joining in the drunken nullsec fun, in addition I set running the third iteration of my Somewhere Out There event, which has recently come to an end, with participating RvB members taking home prizes totalling 30 billion isk.  Quite the birthday present from me to all of you really.  As well as my events others from the committee – and the general population of RvB – stepped to the plate and organised things too:

Now that the birthday celebrations are all wrapped up and over with, I think it is safe to say that even with a larger membership this years celebrations were bigger and better and more well received than ever before.  Everyone who took part really enjoyed themselves, and found new joy in being part of the RvB machine. I know I did, and I mostly stuck with organising & publicity over anything else.

Huge thanks to all of you who attended & took part in any of the events over the past 4 weeks or, its people like you that keep us on the Events committee doing what we do. Oh and because our ego’s need sustenance.

To everyone who missed out, there is always next year!

What does the future hold?

We are now into our third year, with both the 5 trillion isk exploded & 500,000 kill milestones to reach, which in my opinion are well within RvB’s grasp during this year, either way its going to be very explosive!  Helping us towards those markers there will be several RvB Ganked roams, including the 50th roam – for which I am taking suggestions – however before that, there is to be a very very special RvB FFA.

10,000 fitted rifters (and assorted other frigates) being jettisoned in space so RvBers can grab them, explode someone, be exploded by someone, then grab another is pretty much the very definition of special when applied to our case.

This wonderful event is being put together by a very very dedicated team of people who have spent nearly a month fitting and moving the hulls around.  I expect this to go off amazingly well and result in a giant red dot marking our little corner of space for hours on the 3rd November 2012.  Hopefully hundreds of us will participate in such an epic event.

My 3 years in RvB, have been the most enjoyable of my 6 years in EVE.  Nowhere else can I get the instant action on offer here, alongside an amazing array of events and contests, setup and organised by some of the funniest folks I have met in my time in game – and by me of course.

It really stuns me to take a trip down memory lane in regards to RvB and see what small roots we have grown from and to turn and look at what we can become, indeed what we have already become in some ways.  And to know that I have had a part of that and have helped guide us on the path to an even more explodey future really makes me proud.

As long as RvB keeps the explosions going, anyone of us, from Command to bitter vets to fresh faced newbies and even ex-Rvbers can take away the knowledge that they are and have been a part of something very special in a game as special as EVE.  So thanks to CCP, my fellow RvBers and all the people I have met on my road.